The cellular and molecular mechanisms of neurodegeneration and the application of such information to the development of novel strategies for treating Parkinson’s disease, Prion disease, and other neurodegenerative diseases. Research interests also include the role of oxidative stress and endoplasmic reticulum stress in etiopathogenesis of Parkinson’s and Prion diseases. 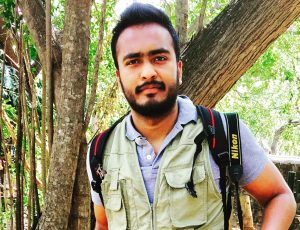 Adhithiya graduated with his Ph.D in Toxicology from Dr. Anumantha Kanthasamy’s laboratory here at ISU. His doctoral research primarily focused on unraveling the molecular mechanisms underlining the interplay between epigenetic changes such as histone modifications and mitochondrial dysfunction, triggered post exposure to neurotoxic environmental mitochondrial complex I inhibiting pesticides in in vitro, in vivo and ex vivo dopamingeric neuronal models of Parkinson’s disease. His recent findings on pesticide-induced nuclear chromatin relaxation functioning as a downstream event of histone hyperacetylation and small pro-apoptotic signaling molecule mediated nuclear membrane damage in dopaminergic neurons, are novel and appreciable. He uses state-of-the-art imaging techniques and 3D reconstruction image processing software to support his hypothesis and findings. Adhithiya has a good number of scientific publications in high impact peer reviewed journals and has also co-authored book chapters. Adhithiya has served as the graduate student officer and has been involved actively in a number of Toxicological Societies at the International and National stages such as the Society of Toxicology and American Society of Toxicology.  Also adding on, he has presented his research in many scientific conferences and won a number of commendable awards.
Adhithiya was also the proud holder of the Lora and Russ Talbot Graduate Fellowship in Veterinary Medicine (2017) and Research Excellence Award – ISU Graduate College.
Recently he started his post doctoral work in Dr.Kanthasamy’s laboratory highlights the study of epigenetic mechanisms of neurodegeneration and to identify biomarkers and novel therapeutic targets for neurodegenerative diseases including Parkinson’s disease.
One a lighter note, Adhithiya is a passionate wildlife, nature and astro (galaxy) photographer, with some timely captured pictures published in famous photography magazines. He goes by adhicha photography